Excitation is the process of electro-magnetizing a pole by applying electric current to the coil of a motor. There are two sets of motor coil, A-phase coil and B-phase coil, and each of them corresponds two poles: positive pole and negative pole. *1
These four poles are placed 90 degrees apart from each other in terms of electrical angles.

A stepping motor has a structure in which multiple sets of these four poles are lined up. In the above figure, one set of four poles is illustrated. The excitation mode is how you excite and rotate the internal rotor magnet.

In the above figure, the magnet rotates 90 degrees, which is the basic angle of one step, and rotates an electric angle of 360 degree by four steps.
The actual motor is: One rotation = 4 steps × the number of pairs. 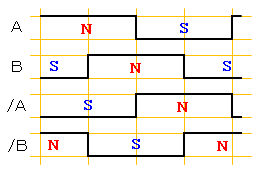 Switch the motor coil current of each phase in a fixed sequence and switch the excitation (N/S polarity) to rotate a motor. 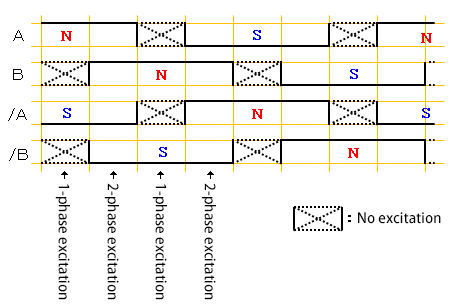 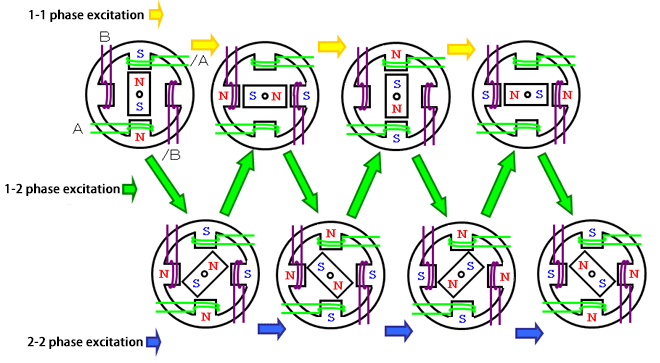 In addition to ON/OFF of each phase of motor coils, a motor can be stopped at a position finer than the basic step angle by changing the current ratio flowing through A-and B-phase coils. This is called micro-step drive.

*3 Since micro step changes the current ratio, and the rotor stops balanced in the middle of the basic step angle, the stopping position may not be accurate depending on the motor structure. With our PF motors, the micro-step drive is effective to reduce vibration and noise. 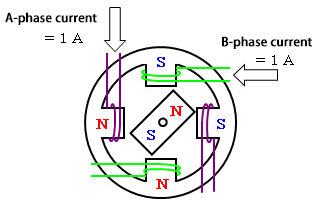 For 2-phase excitation, the current values applying to A and B phases are the same. 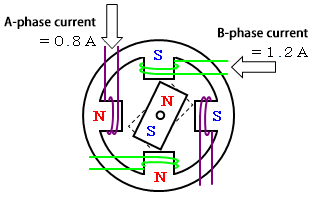 In addition to these specifications, drive ICs have various other specifications.
You can drive stepping motors easily by using the drive ICs once you understand the fundamental knowledge.

When designing the actual circuit board, you need to pay attentions not only to the specifications, but also to the current value and heat generation as well as to the routing of grounds and current detection resistors.

Semiconductor companies often provide you the evaluation boards or technical documentation of such drive ICs, so it would be effective to use them.