Pull-in torque
The maximum torque that a motor can operate at a predetermined pulse frequency and overcome this load to start in the start and stop region.
Also known as starting torque.

Pull-out torque
The maximum torque that a motor can operate synchronously at a specified drive pulse rate in the slewing area. Under load conditions exceeding this pull-out torque, synchronous operation is not available and an out-of-step phenomenon occurs.


The images of pull-in torque and pull-out torque can be explained by driving a car in the more easy-to-understand manner. Please imagine a stick-shift car with a clutch pedal although automatic cars are more popular in recent years.

[Pull-in torque]
To start a car, press the accelerator to increase the velocity of an engine, and connect the clutch. At this time, if the load is too large or you try to start immediately, the car will stall out.
The same can apply to starting a stepping motor. If the load on the shaft is too large or if you try to start suddenly at high speed, the motor cannot start and can go out-of-step.
The pull-in torque characteristic plots the values of revolution and torque that a motor can start without going out-of-step.

To rotate a stepping motor at high speed, it should start in the pull-in torque region and accelerate to the pull-out torque region. 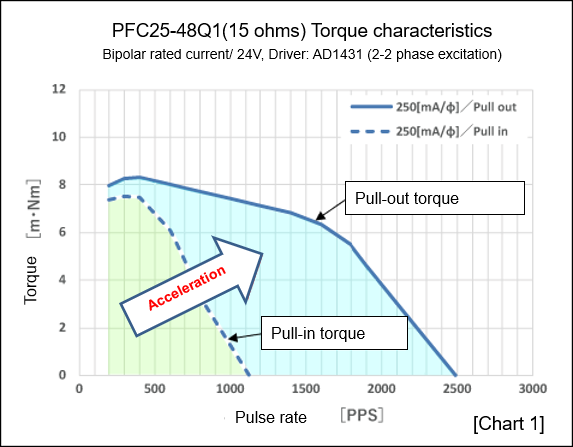 Stepped acceleration/deceleration is to change the speed in step-by-step manner. When operating a drive IC by generating pulses from a microcomputer, etc., the reference pulses may be divided to save the resources of the microcomputer.

We have mainly described accelerations so far. In decelerations, the friction becomes a brake and it may stop a motor in a shorter time than acceleration. In addition, even if pull-in torque and pull-out torque are satisfied in the theoretical calculation, your machine may not move well due to machining errors, assembly errors of the mechanism. Or it may be difficult for you to choose which type of acceleration/deceleration should be performed. In such cases, it is often quicker to actually run the experimental machine or prototype.

We also provide the loan-out service of drivers and controllers, so please feel free to contact us.