1. Heat generation of a motor

Copper loss: P = Power loss (I2R) generated from the winding resistance of a motor coil and the current flowing.

Machine loss: Loss due to the friction or air resistance in a motor. The ratio is small.

The ratio of machine loss is rather small among these losses, and iron loss becomes remarkable when rotating medium-sized to large-sized motors, which might require laminated steel plates, at high speed.
For miniature motors such as PM type in NPM, copper loss accounts for a large part of heat generation. 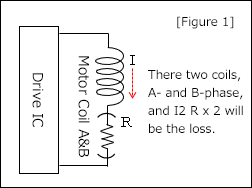 However, this allowable electric power can cause the motor surface temperature high if not radiating heat, so this temperature issue must be considered.

2. Heat generation of a drive IC

Most of the heat out of a drive IC is generated in the power element.
FET: Resistance value between the drain and source when FET is ON and power loss (P = I2R) generated from the current flowing.

Diode: Power loss (P=VI) generated from the forward voltage and the forward current of a diode.


FET ON resistor becomes as low as around 0.1 to 0.4 Ω in recent years, and most of drive ICs use FET elements.
For example, when a current of IM=1A is applied, assuming that the saturation voltage of the collector-emitter voltage of a transistor: VCE = 0.6V and FET ON resistor: RDS = 0.2 Ω,

Now, FETs are getting more used because the power loss is lower. *2

Drive ICs consist of unipolar and bipolar drives. When calculating the power loss in bipolar drives, you must calculate it by the combined resistance of ON resistance of upper and lower FETs through which the current passes [Figure 4]. Since there are two coils of A phase and B phase, the power loss for two circuits becomes heat in both drive ICs.

The allowable heat generation by a drive IC is determined by the power dissipation (W) considering the derating of the IC specifications, and is calculated from the operating temperature, ambient temperature, heat dissipation conditions, etc. At the end, you will operate the motor under various conditions and measure the temperatures to judge the validity. *3

*2 Because the power is proportional to the square of a current, transistors may be advantageous for high currents, such as using a IGBT.

*3 A drive IC has the target motor current, and it may be difficult to adjust the such current when driving a small-current motor with a large-current drive IC. In such a case, we recommend confirming with the IC manufacturer beforehand.