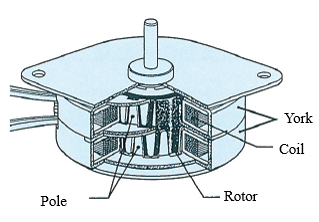 This section describes the malfunctions of stepping motors that are not directly related to the drive ICs.

*1 Permanent magnet is not used for the rotors in VR type stepping motors. The motors rotate only with attraction power.

1. Movements of the rotor of a stepping motor

The rotor of a stepping motor rotates by attracting and repelling of the electromagnets in the stator, so the rotor stops at stable points by decay-oscillation when moving one step at a time. The oscillation varies with the motor size, coil winding, excitation current, excitation method, rotor inertia, viscosity/inertia of the load, and the like.
When rotating at high speed, the next command pulse can enter before the decay oscillation occurs, and the rotor will not be affected by the oscillation. 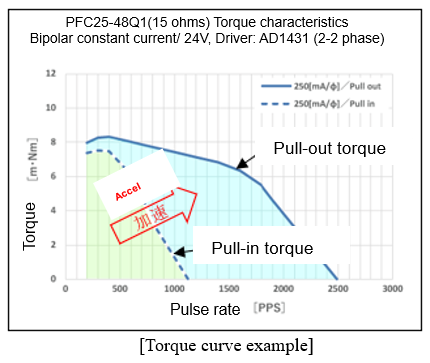 As described earlier, a stepping motor rotates in synchronization between the switching of the electromagnets in the stator and the permanent magnets in the rotor. If the excitation switching of the electromagnet is sadden or the switching speed is too fast, the rotor may not follow the excitation switching, and the synchronization cannot be made. This is called “out-of-step.”

The speed at which a motor can start in synchronization with input pulses at fixed rate is called “Starting pulse rate”. Above that rate, the rotor cannot follow the excitation switching of the electromagnet, resulting in out-of-step. If you want to operate within the pull-out torque range higher than the starting pulse rate, start within the pull-in torque range and then accelerate, so that the rotor can follow. *2

At speed exceeding the pull-out torque range, the rotor cannot follow the excitation switching speed of the electromagnets, resulting in out-of-step. In such a case, use countermeasures such as 1) use a motor that can rotate at a higher speed, 2) increase the motor voltage, or 3) adjust the motor current. *3


*2 “Pull-in torque” is the torque curve representing the relationship between the starting pulse rate and the load torque. A torque curve representing the relationship between the pulse rate and the torque that allows synchronization operations is called “Pull-out torque”. Refer to "1. Pull-in torque and pull-out torque" in No. 8 article, “Acceleration and deceleration of stepping motors”.
*3 If the motor current is raised, the force to stop at the stable points may become a brake. Therefore, lowering the motor current may rotate the motor faster in some cases.

If the next pulse signal is entered while a rotor is still oscillating, the force to rotate in the forward direction and the force to rotate in the reverse direction caused by the oscillation may collide and cancel each other out. Depending on the load conditions or the natural frequency of a motor, the rotor may not move properly to cause displacement of the rotor position. This is called “disturbance.” The pulse frequency at which the disturbance occurs has a certain width, and the frequency band is called “disturbance range.”*4

*4  Sometimes, the disturbance range is also referred to as "resonant area" or "resonant frequency". A phenomenon that a motor in that band area cannot rotate properly is called "disturbance".
*5  2) and 3) reduce disturbance by reducing oscillation when stopping. Also, when a load is applied, the viscosity of the load may be the damper and prevents disturbance from occurring.

Countermeasures for reverse rotation include:
1)    reduce the load inertia
2)    change the operating speed
3)    adjust the motor current value
4)    use a motor whose pull-in torque is larger than the external force
5)    avoid the disturbance range to operate

Also,
6) use an excitation method such as 1-2 phase or micro-step excitation, where the distance between the multiple stable points are short.

Stepping motors can perform position and speed controls without any feedback control, however, there are some disadvantages we have mentioned. So, we hope you will understand them well and use the motors under appropriate conditions.


*6  Reverse rotation is often triggered by repelling due to pushing harder than necessary or hard-stop by hitting to the mechanical ends. When pushing, it is necessary to confirm the actual measurement of the pushing stroke and set the stop position where no large repelling torque is applied.
*7  The rotor should have moved 90 degree per pulse, but it actually moves 270 degree per pulse, which moves three times faster.